What are Adaptogens? Adaptogenic Herbs Explained

Adaptogens have been used for centuries to help the body adapt to stress and promote overall well-being. But what are they, how do they work, and where can you find them? Here is everything you need to know about adaptogens! Stress is one of the few things we ALL have in common. It’s the body’s natural reaction to any change that requires an adjustment or response. Stress can occur at any time, like when you’re stuck in traffic or when you start a new job.

Now, imagine there was a magic potion that could better equip you to handle life’s stressful moments. Well, that’s where adaptogens come in! Except they aren’t magic, they’re natural herbs and plants.

Adaptogens are used to help you adapt to stressors of all kinds, and each one has its own benefits. But what are they, and where can you find them? Keep reading to learn how adaptogens work, and which ones are right for you!

Think of adaptogens as power-ups in a video game – they give you strength and endurance to keep going!

Adaptogens have been used for centuries in both Indian Ayurveda and Chinese medicine. Today, they’re often recommended by naturopaths and holistic doctors to help patients better adapt to stress.

When your body is stressed it goes through a three-stage response called general adaptation syndrome (GAS). The three stages of GAS are: alarm, resistance, and exhaustion. Adaptogens exert an anti-fatigue effect and help you stay in the resistance phase longer – which allows you to persist through any physical or mental stressors. Think of adaptogens as power-ups in a video game – they give you strength and endurance to keep going!

By regulating our response to stress, adaptogens can help:

According to multiple studies, adaptogens possess therapeutic effects and may promote general well-being. And, depending on the type of adaptogen, they’ve also been shown to boost cognitive function, lower anxiety, improve moods, and increase endurance.

Powerful adaptogens and their benefits

Ashwagandha is a medicinal herb that’s been used for over 3,000 years, especially in Ayurvedic medicine. Multiple studies have shown that ashwagandha can help reduce stress and anxiety. In fact, during a 60-day study, ashwagandha root extract reduced stress and insomnia in patients by 69%. This Ayurvedic herb has also been shown to support adrenal function, improve fertility, and even increase muscle mass. Experience the stress-reducing benefits of ashwagandha in the calming Golden Mellow mix and the chocolatey Magic Mushroom mix. Learn more about ashwagandha and its impressive benefits in this article!

Reishi mushrooms are considered adaptogens due to their ability to help you manage stress – but they do a lot more than just that! These functional mushrooms have been shown to improve mood, decrease anxiety and depression, and reduce fatigue – making reishi one of the best adaptogens for anxiety. Reap all reishi's benefits with a hot cup of chocolate thanks to the Magic Mushroom mix. They’re also considered a powerful anti-inflammatory, and can help protect your immune system. Want to know more? Here’s everything you need to know about reishi mushrooms!

Maca is an adaptogenic superfood best known for its ability to improve sexual and reproductive health in both men and women. But that’s not all! Maca has also been shown to be effective at balancing hormones, reducing anxiety and depression, improving memory, and boosting athletic performance. Plus, it’s packed with several vitamins and minerals! We love maca SO much, we use it in the Energy Bomb, Plant Protein, Forever Beautiful, Power Matcha, and Moon Balance mixes! You can learn more about maca in this article.

Turmeric is a popular golden spice used in Indian cuisine. With over 13,700 scientific studies supporting turmeric’s health benefits, it’s hard to dispute this spice has SUPER powers. What makes turmeric so powerful is the active compound curcumin, which is a natural anti-inflammatory. It’s this potent compound that gives turmeric its adaptogenic properties - which is why we included it in the Golden Mellow mix. Studies have found that consuming turmeric can prevent chronic inflammation, reduce depression, and reduce symptoms of PMS. Want to get to know this spice even better? Read along this article to find out all the benefits of turmeric. 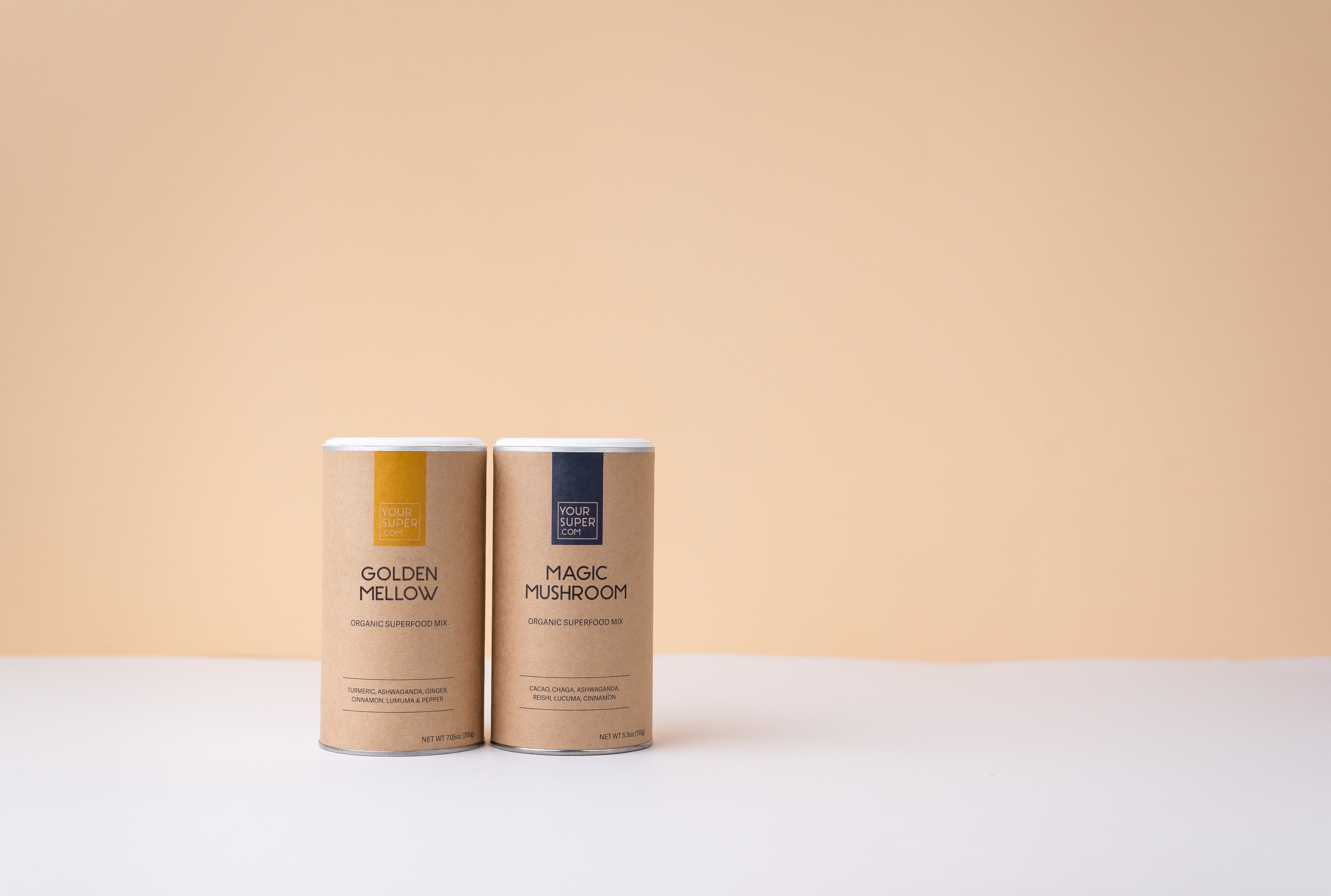 How to add adaptogens to your daily routine

Adaptogens are fairly easy to find, especially in health food stores and Asian markets. However, depending on the adaptogen, you may find the taste to be bitter or pungent, therefore it is best to combine them with other fruits and vegetables, specifically superfoods. Combining adaptogens and superfoods, give your body double the nutrients, and DOUBLE the benefits.

There’s no right or wrong way to consume adaptogens, but in order to effectively incorporate them into your routine, try following this rule: take stimulating adaptogens like cordyceps and maca in the morning/early afternoon, and take depressant adaptogens such as ashwagandha in the evening. Adaptogens may take a while to show effects and some health professionals recommend taking occasional breaks from consuming them, in order to retain their effectiveness.

Physical and emotional stressors are a natural part of life, and while there’s no denying the many benefits of adaptogens, it’s important to remember that there is no cure-all for stress, and they may not work for everyone.