WHAT YOU NEED TO KNOW ABOUT HEAVY METALS

What are heavy metals? And how can they affect your health? Here's what you need to know about heavy metals in the body and how you can reduce your exposure.

What do you think of when you see the word: heavy metal?

Is it bands like Slayer or Iron Maiden? The devil horn hand signal? Or maybe long hair and head banging?

Those are all great answers, but that’s not the kind of heavy metal I’m talking about in this article.

The type of heavy metal I’m talking about are the ones that could be harmful to your health.

WHAT ARE HEAVY METALS?

Heavy metals are naturally occurring elements that are found throughout the earth’s crust.

Scientifically speaking, heavy metals are defined as metallic elements that have a relatively high density compared to water.

There are 23 elements that can be toxic to the body, even in low concentrations. The one caveat is that some heavy metals are essential nutrients that are required for various biochemical and physiological functions. Without them, you can become deficient.

HOW DO HEAVY METALS GET INTO THE BODY?

Heavy metals enter into the human body via air, water and food. Unfortunately, there’s no way you can avoid heavy metals because you’re exposed to them every day.

Once in the body, heavy metals can accumulate over time in your bones, liver, brain, kidneys and heart. Having excess heavy metals in the body can damage vital organs, cause behavioral changes and difficulties with thinking and memory.

THE 4 MOST TOXIC HEAVY METALS 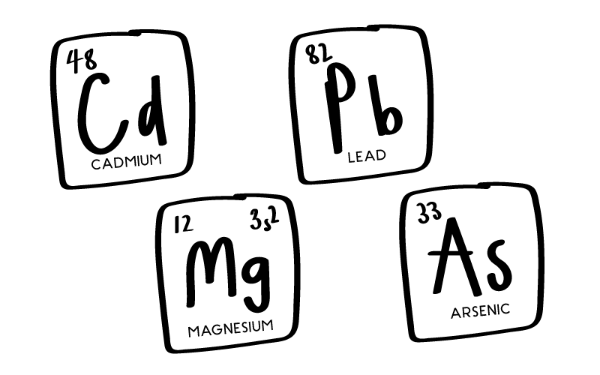 Out of the 23 identified heavy metals, there are 4 that pose the biggest threat to your health: mercury, lead, arsenic and chromium.

Mercury is a naturally occurring element that can be found in the environment, plants and animals. The most common way humans expose themselves to mercury is eating fish.

According to the Environmental Working Group (EWG), “people who eat a lot of high-mercury fish frequently can experience nervous system damage and can suffer from a variety of ailments, including sleep disturbance, headache, fatigue, difficulty with memory and concentration, poor coordination and neuropathy.”

How does mercury get into fish? It enters lakes, oceans and rivers through industrial pollution, such as coal-fired electricity generation, smelting and waste incineration. Once mercury gets into the marine food chain, it “bioaccumulates” in larger predators. This is why it’s riskier to eat larger types of fish like tuna and swordfish.

Because of its lipid solubility, mercury is absorbed in the gastrointestinal tract. This means it can easily cross both the placental and blood-brain barriers. (This is why pregnant women are advised to limit their consumption of fish while pregnant.) Once absorbed, mercury can accumulate in the kidneys, neurological tissue and liver.

Like mercury, lead is a naturally occurring element that can be found in the soil, air and water. In fact, adults absorb 35-50% of lead through drinking water. The Flint, Michigan Water Crisis is a perfect example of how toxic lead can be to humans.

Like most heavy metals, lead accumulates throughout the body, including the bones. And this doesn’t just apply to humans Lead also builds up in the bones of animals.

Here’s a warning for anyone who has jumped in on the bone broth “health” craze. In a 2013 study, scientists measured the levels of lead in broth made from organic chicken bones. The result? Compared to water cooked in the same pot, the bone broth contained nearly 10 times the amount of lead concentrations. So if you want to reduce your exposure to lead, choose veggie broth.

There is no safe level of lead exposure. It’s extremely toxic, especially for children and pregnant women, as well as their unborn child. Lead exposure can cause irreversible brain damage, kidney damage and harm to the reproductive system.

Arsenic is a metalloid found naturally in the earth’s crust. Known as “the king of poisons,” arsenic can be found in water, soil, pesticides and food — especially rice. (Note: You don’t need to abandon rice completely. Consumer Reports suggests opting for white basmati rice from California, India, or Pakistan or choosing brown rice. They have much lower levels of arsenic than rice from other places in the world.)

Researchers at Dartmouth University say long-term exposure to low doses of arsenic may change the way cells communicate, and reduce their ability to function. It may also play a role in the development of diabetes, cancer, vascular disease and lung disease.

The FDA adds that long-term exposure to high levels of arsenic is associated with higher rates of skin cancer, bladder cancer and lung cancer, as well as heart disease.

Cadmium is the most toxic element, even at low concentrations, and it accumulates in the body throughout your life.

Cadmium is predominantly found in fruits and vegetables in trace amounts due to its high rate of soil-to-plant transfer. It can also be found in rechargeable batteries and cigarette smoke, including e-cigarettes.

It is a known carcinogen and has been linked to cancers of the lung, pancreas, breast, prostate, endometrium, and urinary bladder.

THE BEST WAY TO REDUCE YOUR HEAVY METAL EXPOSURE

While it’s impossible to avoid heavy metals completely, there are ways to reduce your exposure — and it all starts with your plate!

This means it’s incredibly important to get the right amount of vitamins and minerals — that’s where superfoods can help!

There are also certain foods you can that have been shown to remove heavy metals from the body:

Another great way to support your body's activity in removing heavy metals from your body is by following a detox diet.

HEAVY METALS ARE NOTHING TO ROCK OUT TO...

The best way to reduce your exposure is making sure you get the essential vitamins and minerals your body needs to work optimally.

If you’re concerned that you’ve had too much exposure to a certain heavy metal, consult your doctor and ask for heavy metal testing.