We’ve all heard the reports that chocolate can be good for you. But it turns out there’s a healthier alternative: cacao! Discover all the chocolatey goodness about cacao, including cacao benefits and how you can incorporate this superfood into your diet.

Do you love chocolate? I do!

Chocolate gets a bad wrap these days — and for a good reason. Most of the chocolate you find in stores are high in calories, and contain high amounts of sugar and animal products like milk or butter.

If you strip traditional candy bars of all the sugar and animal products, you’ll be left with an ingredient that’s actually good for you: cacao.

But what is cacao and where does it come from? Is cacao really healthy? And what’s the best way to eat cacao?

In the words of Willy Wonka, come with me as we explore the chocolate-y deliciousness that is cacao!

CHOCOLATE, NOT MONEY, GROWS ON TREES 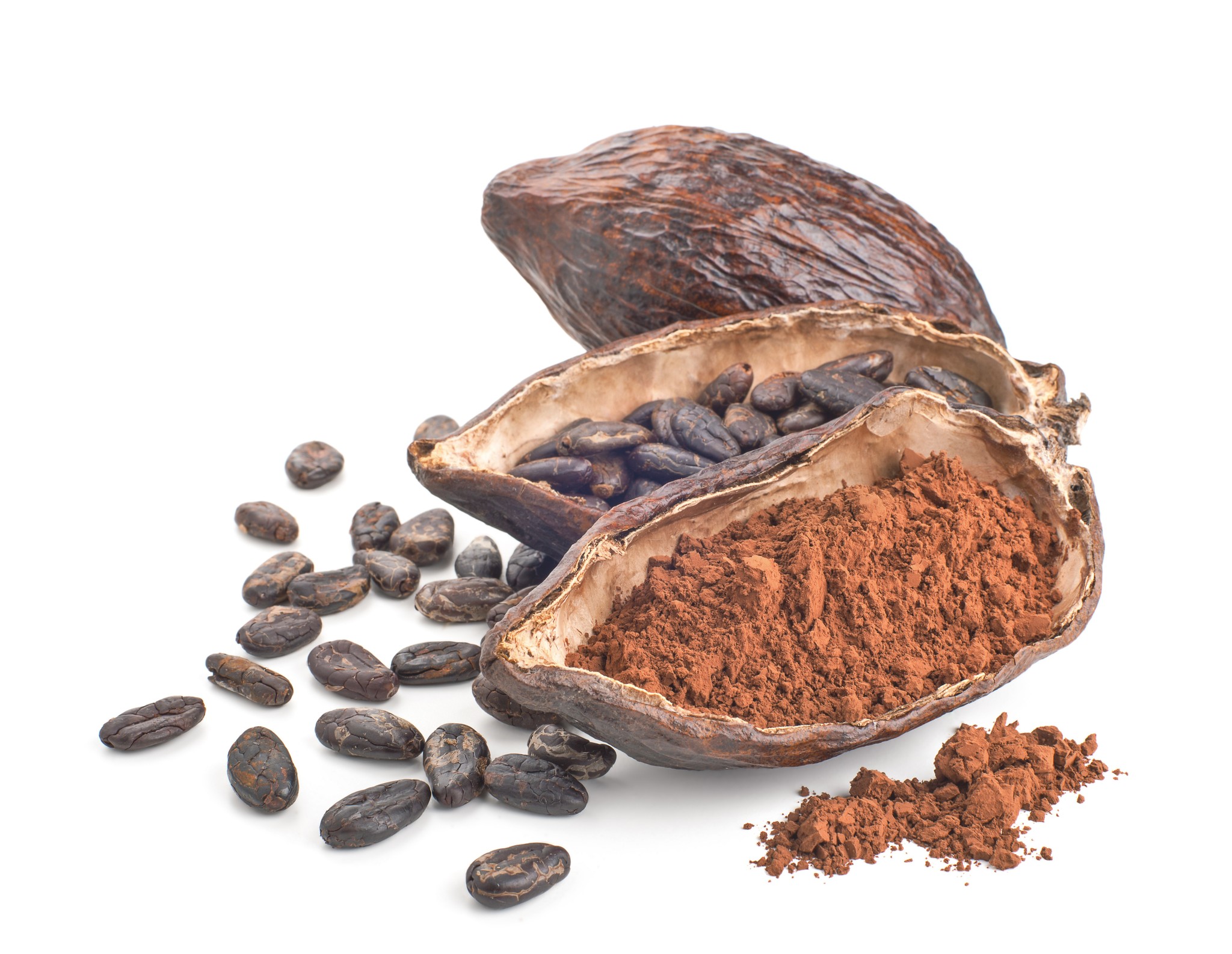 Cacao comes from the Theobroma cacao tree, which in Greek translates to “food of the gods.” The Aztecs actually believed cacao was a gift from the gods. (I think we can all agree on that!) And Ek Chuah was the Maya god of merchants and patron of cacao.

The trees are native to Central and South America, but they can also be found in Africa, too. In fact, 70% of the cacao produced today comes from Africa.

The cacao tree produces pods, which are harvested by hand. Inside each pod, you’ll find white pulp surrounding 30-50 cacao seeds. When you eat chocolate, you’re eating the seeds of the cacao fruit.

The word cacao comes from the Olmec word kakaw. Cacao consumption can be traced back 4,000 years to the Maya, Toltec, and Aztec civilizations.

The Aztecs not only used cacao beans as currency, but also as a beverage for the wealthy and elite.

Moctezuma II, the famous Aztec ruler and namesake of Moctezuma’s revenge aka traveler’s diarrhea, would drink 50 cups of xocōlātl, which means “bitter water,” every day. (Legend has it he would drink one more before visiting his harem for its stimulating effects.)

Mayans, regardless of social status, would drink cacao during religious and wedding ceremonies.

It wasn’t until the 16th century that Spaniards had the idea to add cane sugar and milk to the chocolate beverage. (How 21st century America of them!)

Cacao is the purest form of chocolate you can eat. While cacao has a chocolatey taste, it’s pretty bitter. This is because it’s not sweetened or processed like traditional candy bars. Because cacao is not heavily processed, it retains its high antioxidant content.

Raw cacao contains 4 times more antioxidants than regular dark chocolate and even 20 times more than blueberries. What’s more, research the antioxidant content in cacao is even more beneficial to your health than tea.

According to a 2008 study published in the “Journal of Agricultural and Food Chemistry,” 60-90% of the original antioxidants in cacao are lost through “Dutch processing.” So if you want to reap all the benefits from chocolate, stick to cacao.

In addition to being rich in antioxidants, flavonoids and phytochemicals, cacao is high in non-heme (plant-based) iron as well as zinc, potassium and magnesium.

5 CACAO BENEFITS THAT WILL MAKE YOU WANT TO EAT MORE 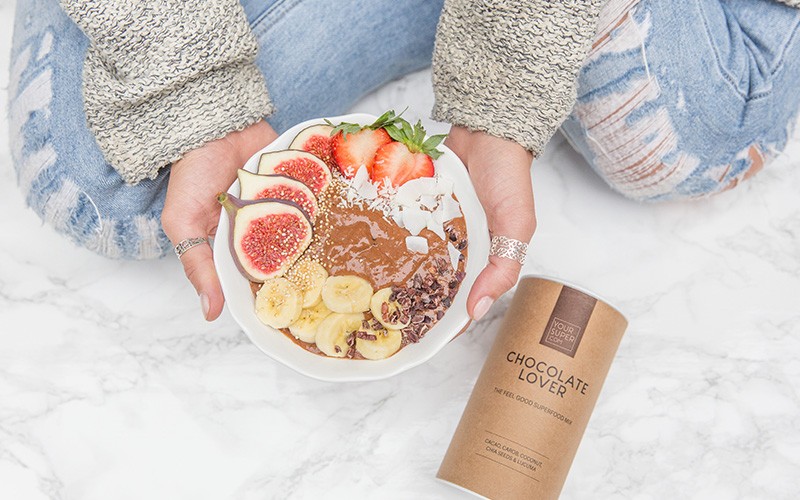 CACAO BENEFIT #1 — IT CAN IMPROVE YOUR MOOD

Does eating chocolate make you happy? Because, same. However, there’s actually a science-backed reason why.

Cacao stimulates the brain to release neurotransmitters, which can trigger emotions like euphoria. When you eat cacao, the body produces a natural, adrenal-related chemical called phenylethylamine (PEA). It usually occurs when you feel excited or in love, causing your pulse to speed up. PEA also allows for more focus and awareness.

Cacao also contains anandamide, which is sanskrit for divine joy. Also known as the “bliss molecule,” it binds to cannabinoid receptors and mimics the effects of THC — the psychoactive molecule in cannabis. In addition to improving your mood, research shows anandamide can inhibit the growth of breast cancer cells.

Do you love chocolate? It will love you back — or at least your heart.

One of the many ways chocolate can protect the heart is by inhibiting the oxidation of LDL cholesterol (aka the “bad” cholesterol). When LDL oxidizes, it sticks to the walls of arteries, which increases the risk of stroke or heart attack.

The polyphenols (the protective chemicals found in plant foods) have an aspirin-like effect and prevents the clumping of blood platelets. This a good thing since the clumping of platelets can lead to atherosclerosis or the hardening and narrowing of the arteries due to a buildup of fat and cholesterol.

High blood pressure can lead to a variety of health problems, such as heart disease, stroke, kidney failure and more.

Research also shows that consuming a small amount of dark chocolate every day can lower blood pressure in those with mild hypertension.

While chocolate may help lower your risk of high blood pressure, following a heart healthy diet (especially rich in plants!) can have a greater impact.

Have chocolate on the brain? That may not be such a bad thing. Chocolate is often listed as one of the top foods for brain health — and there’s plenty of research to back that up.

The flavanols in dark chocolate have been shown to relax the arteries and increase the flow of oxygen to the brain.

A 2012 study published in “Hypertension” showed that the regular consumption of cocoa flavanols might be effective in improving cognitive function in elderly people with mild cognitive impairment.

In addition to its brain-boosting benefits, a 2017 meta-analysis also found consuming up to 3 servings of chocolate a week can lower the risk of stroke.

CACAO BENEFIT #5 — IT CAN HAVE ANTI-DIABETIC EFFECTS

For those who have type 2 diabetes, consuming dark chocolate may be beneficial.

Researchers at the Institute of Food Science and Technology and Nutrition found cocoa flavanols can slow down carbohydrate digestion and absorption in the gut, improve insulin secretion, reduce inflammation and stimulate the uptake of sugar out of the blood into the muscle. However, they do warn against consuming chocolate that is high in sugar.

THE HEALTHIEST WAY TO ENJOY CACAO 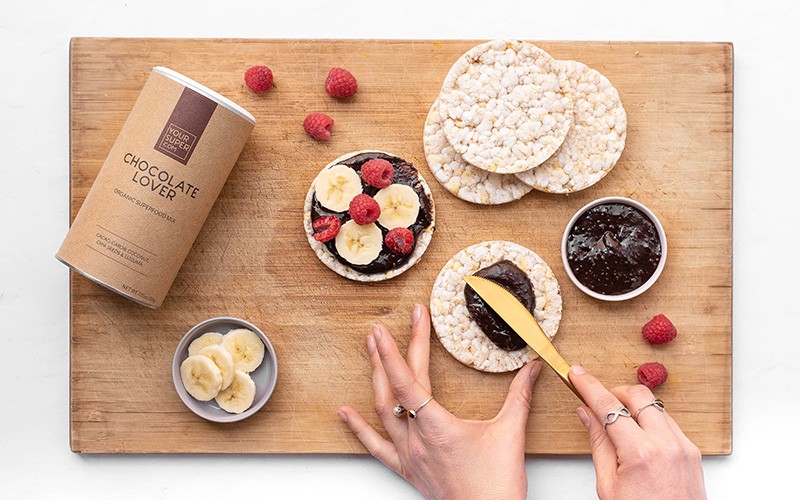 As many studies note, the health benefits of cacao come from consuming dark chocolate with low amounts of sugar or raw cacao.

Our favorite way to enjoy cacao is by adding the Chocolate Lover mix to milkshakes, oatmeal and peanut butter cups. You can even use it to make ice cream and baked goods!

This healthy alternative to chocolate contains, on average, 713% more nutrients than regular store-bought chocolate bars. It will also boost your mood and fight back against those pesky sugar cravings. In addition to organic cacao, which we source directly from Peru, the Chocolate Lover mix also includes carob, coconut, chia seeds and lucuma. ENJOY THE BENEFITS OF CACAO!

Curb your cravings and boost your mood with our Chocolate Lover mix.

Only 5 delicious and nutritious superfoods - nothing else!