Shatavari: Health Benefits & Why YOU need to Know this Superfood

Shatavari has some serious benefits when it comes to women’s health. Balancing hormones, this adaptogenic herb does it all. Here’s everything you need to know about Shatavari! I wouldn’t trade being a woman for anything in the world. But let’s face it, it isn’t always sunshine and rainbows.

Between our menstrual cycle, pregnancy, and menopause – our bodies endure a LOT. Luckily, there’s an ancient herb known to support us through all of it.

I’m talking about Shatavari (shot-uh-var-ee), an herb that grows in shady, low altitudes in India, Asia, and Africa. Keep reading to learn how Shatavari can balance your hormones and why it’s considered the queen of herbs.

Shatavari, or Asparagus racemosus, is an adaptogenic herb – meaning it supports the body’s ability to accommodate mental, physical, and emotional stress.

Research indicates that Shatavari contains anti-ulcer, antioxidant, antidiarrhoeal, antidiabetic, and immunomodulatory properties. It’s been used in Ayurvedic medicine for centuries and is considered a general health tonic for its ability to calm nerves, fight inflammation, and ease stomach issues.

The word “Shatavari” translates to “she who possesses a hundred husbands,” which offers some insight to its many female-related health benefits!

Shatavari: the queen of adaptogenic herbs

In Ayurveda, shatavari is known as the “queen of herbs,” because it promotes love and devotion. But its benefits don’t stop there! Shatavari is a powerful, adaptogenic herb that supports women through all stages of the female reproductive cycle.

“Shatavari – a well-known female rejuvenation, is very effective in enhancing female fertility and is actually considered to be the most helpful for women. It is traditionally used by women for overall health and vitality, to promote lactation, and as an aphrodisiac,” says Dr. Jasmine Gujarathi, professor at the Patel Institute of Ayurvedic Studies.

Interested in adding Shatavari to your daily routine? Keep reading to learn how Shatavari can balance your hormones and improve symptoms of PMS!

Did you know over 75% 404 of women suffer from premenstrual syndrome (PMS)? It’s no secret that our menstrual cycle takes quite a toll on all aspects of our health. Luckily, Shatavari may relieve some of those unpleasant symptoms.

If you suffer from period cramps, research shows that Shatavari can help! Thanks to its anti-inflammatory properties, this superfood has muscle-relaxing effects on uterine tissue which can help relieve stomach pain. And, in a study published in Biomedicine and Pharmacotherapy, Shatavari can help improve symptoms of polycystic ovary syndrome (PCOS).

Looking for natural remedies for mood swings? This common PMS symptom is due to a drop in estrogen 404. When estrogen levels dip, so does serotonin – which causes irritability, anxiety, and depression. According to a 2014 study published in Cellular and Molecular Neurobiology, Shatavari reduces anxiety and depression by interacting with serotonin and gamma-aminobutyric acid (GABA) systems. In addition to exercise, adding Shatavari to your diet is a wonderful way to release feel-good hormones and boost your mood.

Shatavari has also been shown to have a cooling effect, which can improve some symptoms of menopause. In a 12-week study, 117 menopausal women reported a reduction in hot flashes and night sweats.

Whether you’re pregnant or trying to become pregnant – Shatavari may offer support. Because Shatavari controls estrogen production, it can help produce the luteinizing hormone (LH) that’s necessary for triggering ovulation.

Other studies suggest that Shatavari can support mothers during pregnancy, birthing, and nursing. In a 2011 study, researchers evaluated the effects of Shatavari on 60 lactating mothers and found that the herb significantly increased milk supply.

Note: If you’re currently pregnant, or you’re planning on becoming pregnant, consult your doctor before taking this herb. 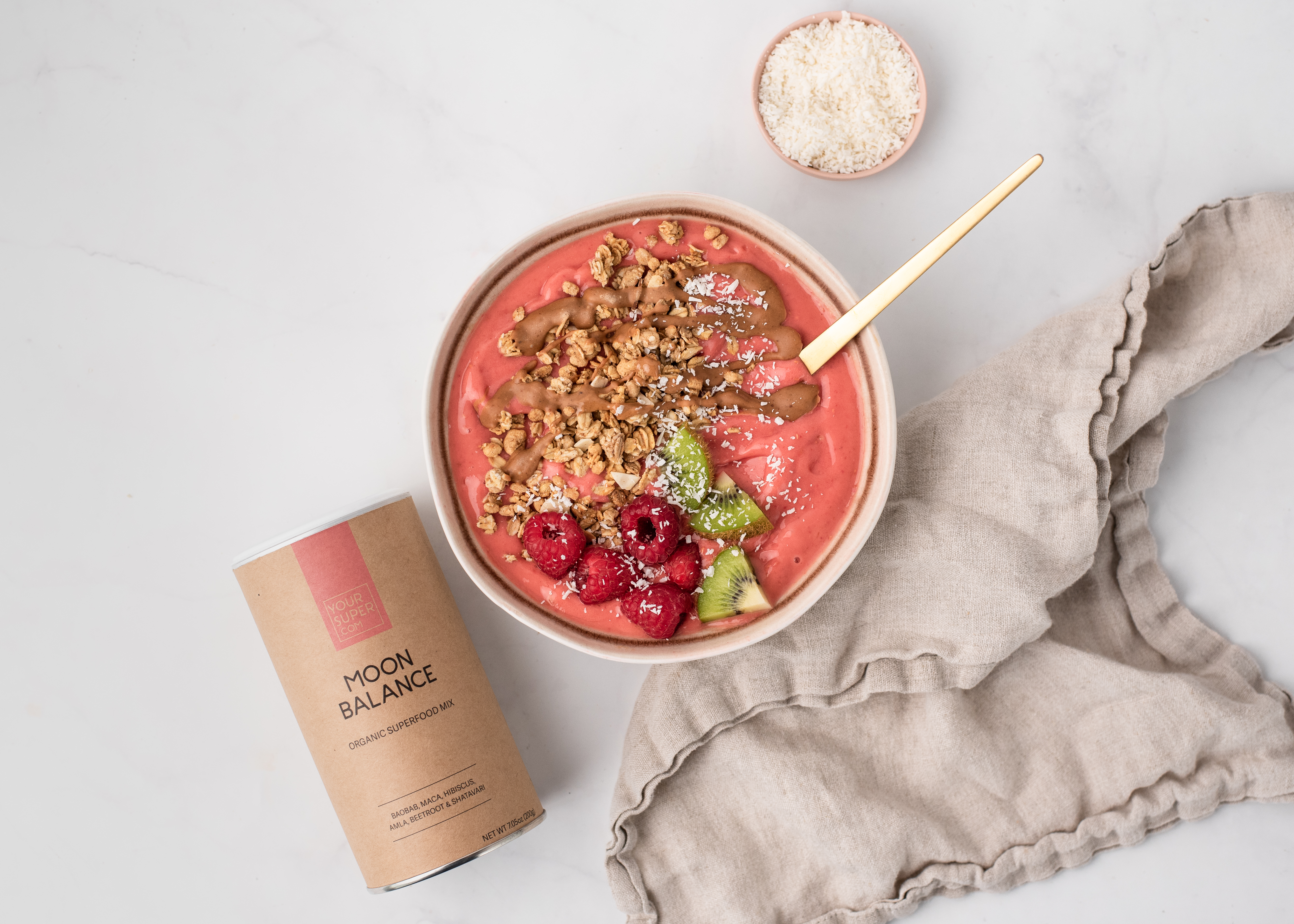 How to add shatavari to your diet

According to Aviva Romm, MD-midwife and herbalist, Shatavari is beneficial for all aspects of your health. “In my practice, I suggest Shatavari for women who are exhausted, overwhelmed, or are struggling with hormonal imbalances—especially fertility challenges and menopausal symptoms,” she says.

And don’t worry men, Shatavari has plenty of benefits for you, too! From improving heart health to digestive health, there’s very little Shatavari doesn’t do!

You can find Shatavari in liquid extracts, supplements, and powders – but our favorite way to get its benefits is with the Moon Balance mix. With the addition of 5 powerful superfoods, maca, baobab, amla berry, beetroot, and hibiscus – it’s the perfect mix to balance your hormones and improve your health!