The Best Medicinal Plants for Women (and Their Use)

Whether it's menstrual pain, hot flushes during menopause or a bladder infection - women have been using special medicinal plants for specific ailments for centuries. Here you can find out all about the best medicinal plants for women, where to find them and how to use them. Note: This is not medical advice. Please consult your doctor before using the plants as they may interact with medicines.

Origin of medicinal plants and herbology

Special plants have a long tradition of healing minor and major ailments - especially in women. Researchers believe that medicinal plants were used more than 50,000 years ago (yes, we didn't add a 0)! They were used by primitive peoples for certain customs and rites, for example. The knowledge about the effects of specific plants was passed on from generation to generation, first by word of mouth, and finally also in writing. In order to find out which plants worked how, they simply experimented - we still benefit from this courageous approach of our ancestors today!

Greek and Roman healers were considered to be the pioneers of the teaching of medicinal plants. They were the first to observe and describe the symptoms of illnesses in order to "prescribe" certain plant treatments.

"Nature cannot be taught by anyone, she always knows the right thing to do." - Hippocrates

If you look a few centuries further, to the Middle Ages, you cannot avoid the name of the abbess Hildegard von Bingen. In the Middle Ages, medicinal plants experienced a real boom - and they were especially cultivated in monasteries. Hildegard was the first to bring together the knowledge from the monasteries with that of folk medicine and then wrote it down for posterity. Even today, one can read her explanations and refer to them.

And even with the advent of "modern" medicine in the 19th century, medicinal plants did not lose their importance. For the production of some medicines, the centuries-old teachings were recalled.

You might be wondering now which is better: nature (in powder form) or "modern" capsules? We explored this very question in another article - so feel free to check out the Quick Check! 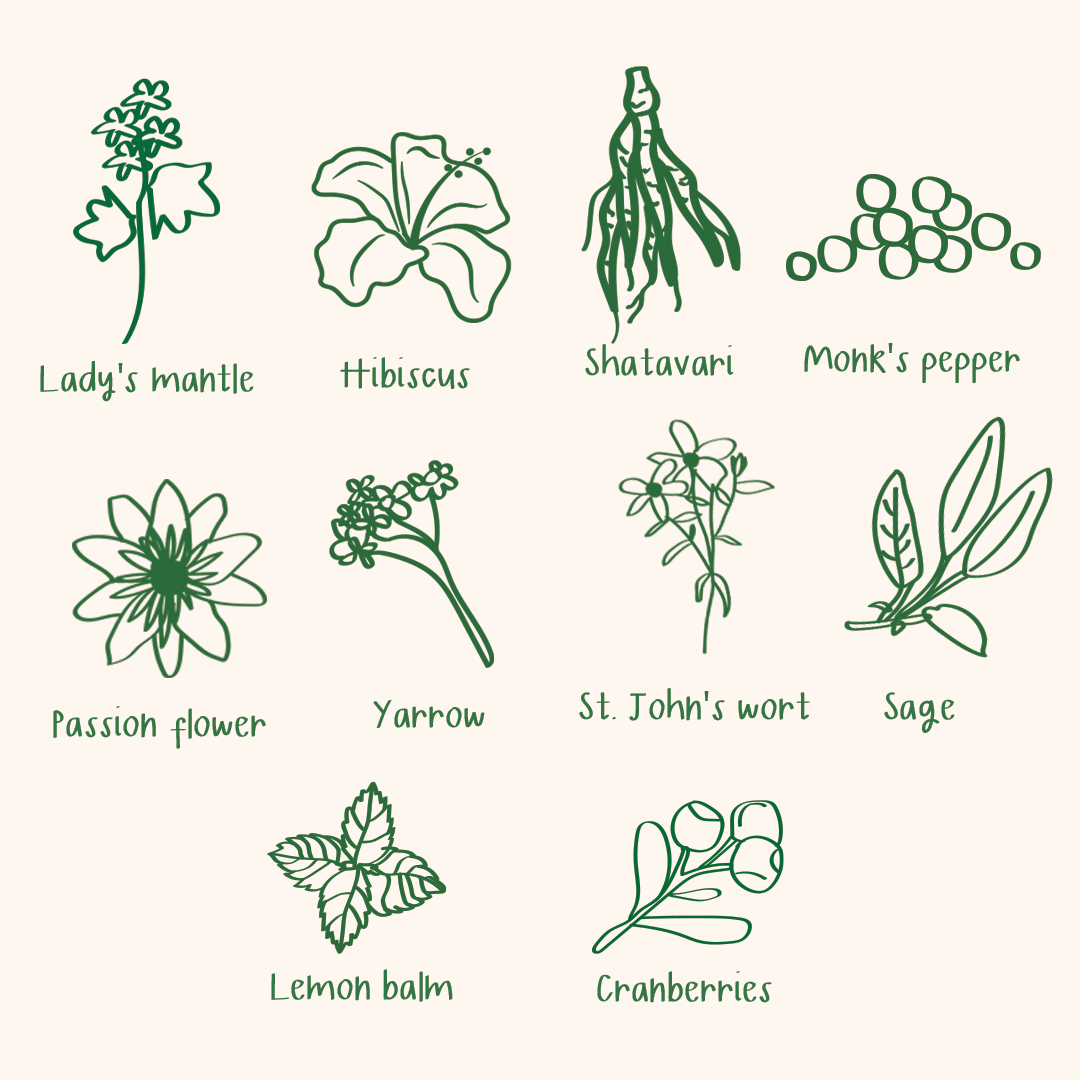 Plant: Lady's mantle belongs to the rose family, grows to about 30 cm tall and has yellow-greenish flowers that bloom from May to September. The plant grows primarily in Europe, North America, and Asia.

Uses: As a tea infusion

Active ingredients: Tannins have an astringent effect, which in turn can prevent bad bacteria from penetrating the intestinal wall.

Plant: Hibiscus belongs to the mallow family and flowers here in Germany from June to September. The plant is native to West India, Asia and Africa.

Uses: The cut and dried flowers are infused as tea and used in ointments.

Learn more about the health benefits of hibiscus!

Plant: This Indian plant (translated as "Indian asparagus") is a many-branched, thorny bush with roots up to 2 cm thick and 100 cm long. Shatavari is mainly used in Ayurveda, where it is praised as a tonic and rejuvenator.

Uses: The fresh leafy greens or the dried roots are traditionally used in oils and wines. Shatavari powder from the roots is mainly taken as a food supplement in this country.

Active ingredients: asparagine & saponin, which mainly stimulate liver and kidney activity. Symptoms of an asparagine deficiency can include weakened endurance, performance and libido.

Learn more about the effects and use of Shatavari!

Plant: Monk's pepper belongs to the verbena family (like verbena) and grows mainly in the Mediterranean region and western Asia, mostly along rivers or coasts. The red fruits resemble peppercorns and were often used by nuns and monks in monasteries in the Middle Ages to keep vows of chastity - hence the name. Incidentally, the chastity story comes from Homer's Iliad, where the plant was considered a symbol of chastity and defence against evil.

Uses: Extracts for preparations are made from the fruits. Available in pharmacies, should only be taken with medical advice.

Active ingredients: Monk's pepper contains so-called diterpenes, which can prevent the release of prolactin in the brain, which in increased concentration is responsible for the symptoms of PMS.

Plant: The common yarrow belongs to the daisy family and grows in Europe and northern Asia in meadows and along roadsides.

Uses: As an essential oil, it is said to stimulate appetite and aid digestion. It is also said to have antispasmodic and anti-inflammatory properties. As a tea, it can be used like camomile and help with digestive complaints such as flatulence.

Active ingredients: azulene, 1,8-cineole and camphor (in the essential oil), guaianolides and germacranolides.

Plant: Passion flowers are mainly native to tropical and subtropical South America as well as Central and Southern North America. They are climbers with herbaceous, woody growths and flower from early summer to autumn

Uses: The herb is used medicinally in oils and as an extract.

Active ingredients: Flavonoids. However, the effect of the herb has not yet been scientifically proven.

(Caution: St. John's wort can interact with many medicines, including the contraceptive pill)

Uses: As an extract, St. John's wort is used in numerous medicines and is considered a herbal antidepressant. St. John's wort oil is said to provide relief from skin irritations and inflammations and helps to heal minor wounds. In addition, St. John's wort can be used as a tea, but there the positive effect on the psyche is rather weak.

Active ingredients: Hyperforin and hypericin, but the effect is not scientifically proven.

Plant: Sage is a member of the ligule family and is native to the Mediterranean region. Sage is harvested before flowering, as the aroma and active substances are at their highest at this time.

Uses: Dried or fresh as a spice in many dishes, as a tea infusion, in ointments and creams, sweets, toothpaste.

Active ingredients: Terpenoids, labiate tannins, flavonoids and bitter substances, which can have an anti-inflammatory effect.

Plant: Lemon balm belongs to the mint family and has a lemony scent (hence the name). Its use as a therapeutic agent dates back to the 14th century. Lemon balm grows in Europe.

Uses: Dried as a tea or seasoning.

Learn more about the health benefits of lemon balm!

Plant: Cranberries are the fruits of an evergreen heather shrub that grows mainly in Eurasia, e.g. in the Swiss Alps or in Scandinavia.

Uses: Similar to cranberries, preparations from the fruit are used in medicinal extracts or as a tea infusion against bladder infections. Cranberries can also be found in juices, capsules or in granulated drinks.

Active ingredients: polyphenols, proanthocyanidins, flavonoids, organic acids with antimicrobial and antioxidant effects, as well as vitamins and minerals. The proanthocyanidins are also said to inhibit the attachment of bacteria to the urothelium of the urinary bladder, thus preventing or combating bladder infections.

*Shatavari and hibiscus are in our bestseller Moon Balance Mix! The perfect mix for women. For happy hormones - no matter what age or cycle!

We use lemon balm in our Gut Feeling Mix because of its calming effect.

Please Note: Medicinal plants often take several weeks to work. So remember to use them regularly and incorporate them into daily wellness rituals.