Are you ready to kick your coffee habit? Brew yourself a healthier morning routine with these 6 healthy coffee alternatives! Coffee is one of the world’s most popular beverages. So popular in fact, that Americans spend an average of €1,100 per year consuming it!

If you’re one of the 125 million people who depend on coffee each day, then life without your cup of joe may seem a little far-fetched. But if you’re tired of caffeine crashes, withdrawal headaches, and spending $6 on your daily iced lattes, it’s probably time to give up the addiction.

How much does a cuppa affect your health? Studies show that opting for healthier caffeine-alternatives won’t only brighten your smile, but can reduce your anxiety, improve your digestion and much more! Here are 4 reasons you should kick your coffee habit for good!

1. Coffee can cause anxiety

If you notice yourself experiencing symptoms of anxiety, especially in the mornings, it may be time to pay close attention to your coffee intake. Anxiety is your body’s natural response to stress, and it promotes your “fight or flight” instinct. And research shows that drinking coffee can also trigger this response.

One study found that the caffeine in coffee has an almost immediate effect, starting in as little as ten minutes. During this time, caffeine blocks a molecule in our brain called adenosine. This chemical process increases heart rate, irritability, excitement and nervousness. For the average adult, the effects of coffee last only two or three hours, which can prompt you to brew another cup.

2. Coffee can disrupt your sleep

Everyone experiences fatigue, but if you spend the majority of your week yawning in-between coffee and daydreaming about your bed, there could be a bigger problem. Lack of sleep can make you prone to serious health issues, such as heart disease, high blood pressure and diabetes. A great way to improve your sleep? Skip your daily brew!

A study published in the journal of “Science Translational Medicine” found that drinking coffee disrupts your circadian rhythm. During the 49-day long study, participants who drank the equivalent of one espresso had a 40 minute delay in their internal clock. In other words, the more coffee you drink, the more coffee you’ll need to stay awake.

3. Coffee can cause digestive issues

It’s no secret that drinking coffee has a tendency to create more trips to the bathroom. But it also creates a handful of other unpleasant symptoms. Because of coffee’s acidity, studies show it may be associated with Gastroesophageal reflux disease (GERD), which affects 1 in 5 people in the U.S.

Coffee consumption has also been linked to irritation of the gastric mucosa, disruption of the mucosal barrier and increased risk of peptic ulcers. More data shows that coffee acts as a stomach and esophageal irritant, and should be avoided if you have frequent heartburn or acid-reflux.

More than 35 million Americans have unhealthy cholesterol levels, putting them at risk for cardiovascular disease, coronary heart disease and stroke. But studies show that skipping your cup of java may decrease these health risks.

Cafestol, the oil found in coffee, affects the body’s ability to metabolize and regulate cholesterol, which can cause it to rise. In fact, researchers concluded that cafestol is the “most potent cholesterol-elevating compound” identified in the human diet. 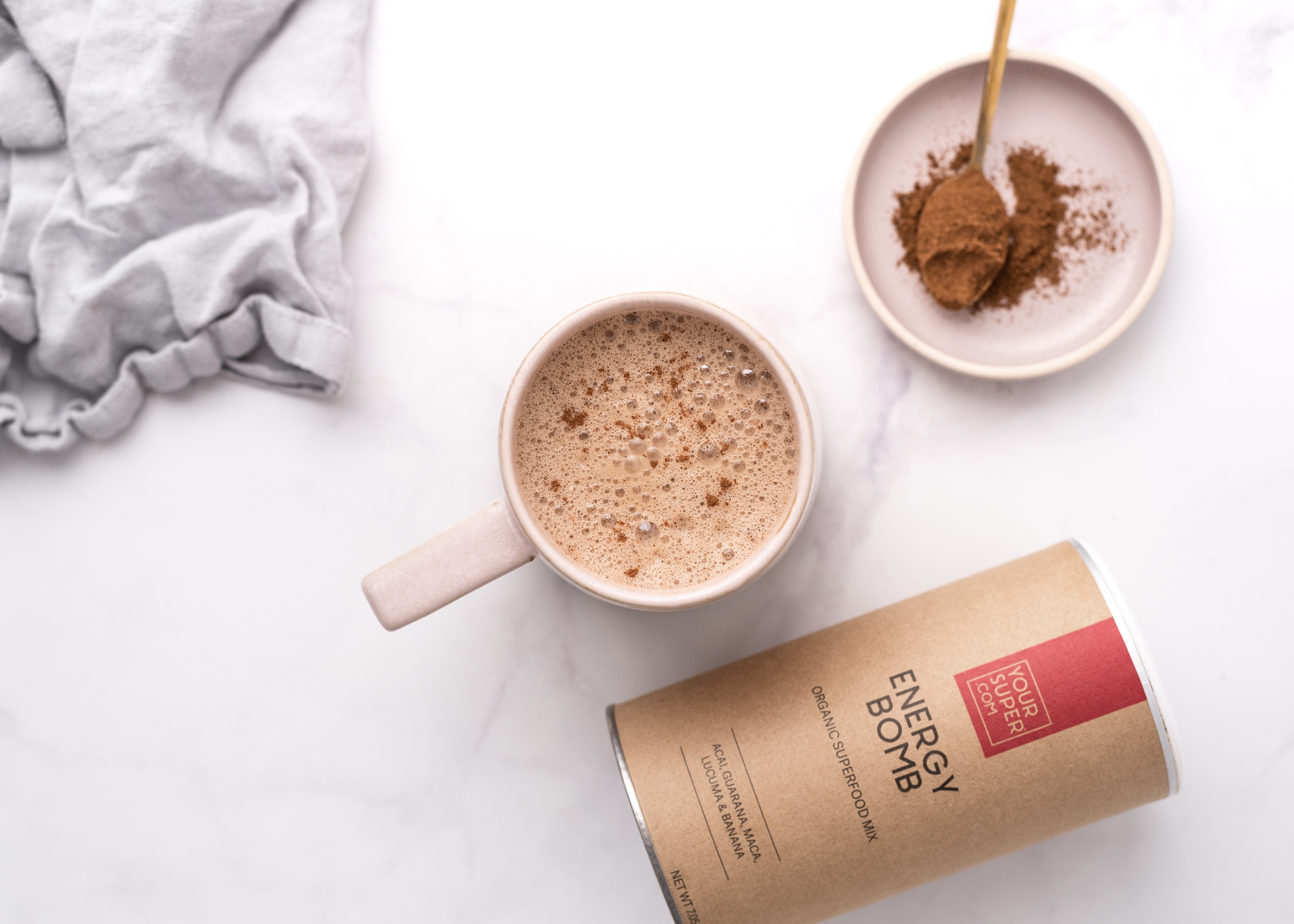 The good news is, you can still get a warm hug from your mug without the negative side effects that come with coffee. Here are five healthy (and delicious) coffee alternatives that make it easy to kiss your cappuccino goodbye!

If you want to avoid caffeine entirely, but don’t want to interrupt your morning routine of sipping on something warm, give herbal tea a try. Herbal teas come in a wide range of flavors, each with their own health-promoting benefits. Whether you’re wanting to relieve indigestion and period cramps with ginger tea, boost vitamin C with rose hip tea or relax with a cup of chamomile, there’s an herbal tea for your every need.

Tip: Looking for something creamy? When making your herbal tea, swap out water for steamed plant-based milk!

Caffeinate the healthy way with green tea! Depending on the leaf, one cup of green tea can contain 30-50mg of caffeine, which is significantly lower than the amount found in regular brewed coffee. Unlike coffee, green tea has been shown to have anticarcinogenic, anti-inflammatory, antimicrobial, and antioxidant properties. But if you really want to step up your green tea game, try matcha instead.

Matcha (like the kind found in the Power Matcha mix) is green tea in the form of finely-ground powder, but because it’s made with the entire tea leaf, it contains double the amount of health benefits and 3x the amount of caffeine. While the caffeine amount is only slightly lower than that of coffee, the caffeine in matcha is released slowly into the bloodstream over a 6-8 hour period, which can help prevent anxiety and the dreaded caffeine-crash.

Who can say no to an energising latte? The Energy Bomb mix is made of  superfoods and provides you up to 8 hours of natural, long-lasting energy. This mix gets its caffeine from guarana, an Amazonian fruit that has 4-6 times more caffeine than coffee beans. But unlike coffee, the caffeine in guarana is released slowly, which helps prevent jitters. In addition to being a natural energy booster, guarana can improve mental fatigue, promote heart health and protect your skin against anti-aging properties. Simply mix it with plant-based milk and you're ready to feel boosted all day long.

Golden milk is a caffeine-free latte made with turmeric, a popular Indian spice used in curries. This golden superfood is best known for its powerful anti-inflammatory properties provided by the phytochemical curcumin. Winding down has never been so easy - and natural - with the Golden Mellow mix, a superfood blend for instant golden milks.

Can drinking a cup of hot cocoa really be healthier than a cup of coffee? Absolutely! While hot chocolate doesn’t offer much in the caffeine department (containing around 5mg per cup) it can have some pretty sweet benefits. The benefits of cocoa vary depending on its quality, but according to the Harvard Medical School, they come from polyphenolic flavonoids, or antioxidants. These flavonoids are known to promote heart health and regulate blood sugar. In addition, cocoa is a great source of calcium, copper, iron and magnesium. Want hot chocolate with benefits? Try the Magic Mushroom mix!

Switch up what's in your cup

Even if you aren’t a “4 shots of espresso” type of person, drinking coffee still comes with health risks and awful side effects. And while it may seem impossible to quit, there are a handful of healthy coffee alternatives to help ease the process.

Imagine a world free of headaches, mid-day caffeine crashes and Starbucks wait times – not to mention the numerous health benefits that come when you quit coffee.