What are the Blue Zones?

"Blue zone" is a non-scientific term for geographical regions where some of the oldest people in the world live. It was first used by author Dan Buettner, who studied areas of the world where people live for an exceptionally long time.

Fun Fact: In fact, they are called "blue zones" because Buettner and his colleagues drew blue circles on a map when looking for these areas.

A number of studies have shown that these areas have an extremely high proportion of centenarians, people who live to be over 90 or 100 years old.

Interestingly, however, genetics is only responsible for 20-30% of this particular longevity. Environmental influences, including diet and lifestyle, thus play a major role in determining life expectancy.

These are the 5 blue zones described by Buettner in his book The Blue Zones:

Ikaria (Greece): Ikaria is an island in Greece where people eat a Mediterranean diet with lots of olive oil, red wine and home-grown vegetables.

Ogliastra, Sardinia (Italy): The Ogliastra region of Sardinia is home to some of the oldest men in the world. They live in mountainous regions where they usually work on farms and drink a lot of red wine.

Okinawa (Japan): The oldest women in the world live on Okinawa. They eat a lot of soy-based food and practice Tai Chi, a meditative form of exercise.

Nicoya Peninsula (Costa Rica): The diet of the Nicoyans is based on beans and corn tortillas. The people in this region are still regularly active in sports into old age and have a certain sense of life, a "plan de vida".

What is the Blue Zones Diet?

People in Blue Zones eat a wide variety of seasonal garden vegetables and preserve or dry the surplus to enjoy in the off-season.

Some of the best foods for longevity are leafy vegetables such as spinach, kale, turnips, chard and kohlrabi. Along with seasonal fruits and vegetables, whole grains and beans, they dominate the meals of people in Blue Zones all year round. Here are a few more observations regarding dietary behaviour in the Blue Zones.

In the Blue Zones diet, oils are usually only consumed on the basis of olives or avocados; vegetable oils tend to be avoided. One is particularly popular: in Ikaria, middle-aged people consume about 6 tablespoons (!) of olive oil daily.

In four of the five blue zones, people do consume meat, but only in moderation, as a feast, a small side dish or to flavour dishes. Perhaps surprisingly, even fresh fish is eaten only up to 3 times a week in smaller portions.

Mostly small, relatively inexpensive fish such as sardines, anchovies and cod are consumed - the species that are not exposed to the high mercury levels or other chemicals that are found in the largest supply of gourmet fish. A pleasant side effect: the waters on which most people depend are not overfished due to low consumption and the natural ecosystem remains intact.

Traditional cow's milk is rarely consumed in the Blue Zones diet. This is due to its high fat and sugar content, but probably also simply because most people cannot digest lactose that well. in the Icarian and Sardinian Blue Zones, goat's and sheep's milk products are used at most. Interestingly, however, most goat's milk is not consumed in liquid form but fermented as yoghurt, sour milk or cheese. Goat's milk does contain lactose, but it also contains lactase, an enzyme that helps the body digest lactose.

Eggs are eaten about two to four times a week, usually as a side dish with a wholemeal or a vegetable dish. The Nicoyans:inside, for example, fry an egg and fold it into a corn tortilla, with beans as a side dish. In Okinawa, eggs are cooked in a soup, and in the Mediterranean, fried eggs are served as a side dish with bread, almonds and olives for breakfast. Eggs all have one thing in common: they come from free-range chickens that eat a variety of natural foods and are not given hormones or antibiotics. In addition, these slowly matured eggs are naturally richer in omega-3 fatty acids.

Beans are a must-have, not only in the Blue Zones!). There, at least 80 g of cooked beans end up on the plate every day: black beans in Nicoya, lentils, chickpeas and white beans in the Mediterranean and soybeans in Okinawa. People in the blue zones eat at least four times as many beans as people in the USA.

And because beans are so hearty and filling, there is simply no room on the menu for less healthy foods.

Mindful sugar consumption - that is the secret of Blue Zones. People eat sugar with full intention and not as a habit in coffee or as a quick energy boost in a chocolate bar. Just to clarify again, we of course mean added, refined (raw (cane)) sugar and not naturally occurring sugar. sugar and not the naturally occurring sugar in fruit, fructose. Be sure to eat no more than 7 tsp of this sugar daily. In the Blue Zones, of course, there are still delicious desserts. However, people save these for special occasions!

The golden nut rule of the Blue Zones? 2 handfuls per day. But again, which nuts? In other words: no salted, roasted peanuts, but for example almonds (Ikaria & Sardinia) and pistachios (Nicoya).

By the way, the optimal nut mixture looks like this: Almonds (high in vitamin E and magnesium), peanuts (high in protein and folate, a B vitamin), Brazil nuts (high in selenium), cashews (high in magnesium) and walnuts (high in alpha-linolenic acid, the only omega-3 fat in a plant-based food).

Bread is a staple in your household? Don't worry, bread and a long life are not necessarily mutually exclusive...it just depends on the type of bread! In the Blue Zones, people eat either sourdough bread or wholemeal bread - that is, bread without bleached white flour. In Ikaria and Sardinia, breads are made from different types of whole grain such as wheat, rye or barley, each containing a wide range of nutrients such as the amino acid tryptophan and the minerals selenium and magnesium.

Wholemeal breads have a higher fibre content than most common wheat flours, and sourdough breads are usually better tolerated because the wheat ferments and the gluten can thus be digested better.

This is where zero waste chefs and the Blue Zones residents interlap The whole food is used. So not just the yolk, not just the tuber, not just the pulp, but EVERYTHING. And yes, you can eat the peel too, as it is usually full of nutrients and fibre. The Blue Zones diet also provides mostly whole foods, ingredients that don't need a nutritional label on a package, but whose only package is the one that comes from Mother Nature (aka peel). And they are then raw, cooked, ground.

Coffee: In Sardinia, Icaria and Nicoya, coffee is drunk in abundance everywhere. Research has shown that coffee consumption is associated with a lower incidence of dementia and Parkinson's disease.

Tea: In Okinawa, green tea is drunk throughout the day. Ikarians:inside drink infusions of rosemary, wild sage and dandelion - all herbs known for their anti-inflammatory properties.

Red wine: People who drink red wine in moderation seem to live longer than those who do not. (Now this doesn't mean you should start drinking if you don't actually drink alcohol! Again, it depends on the dose: Usually 1-3 small glasses of red wine are enjoyed on special occasions with friends or family. 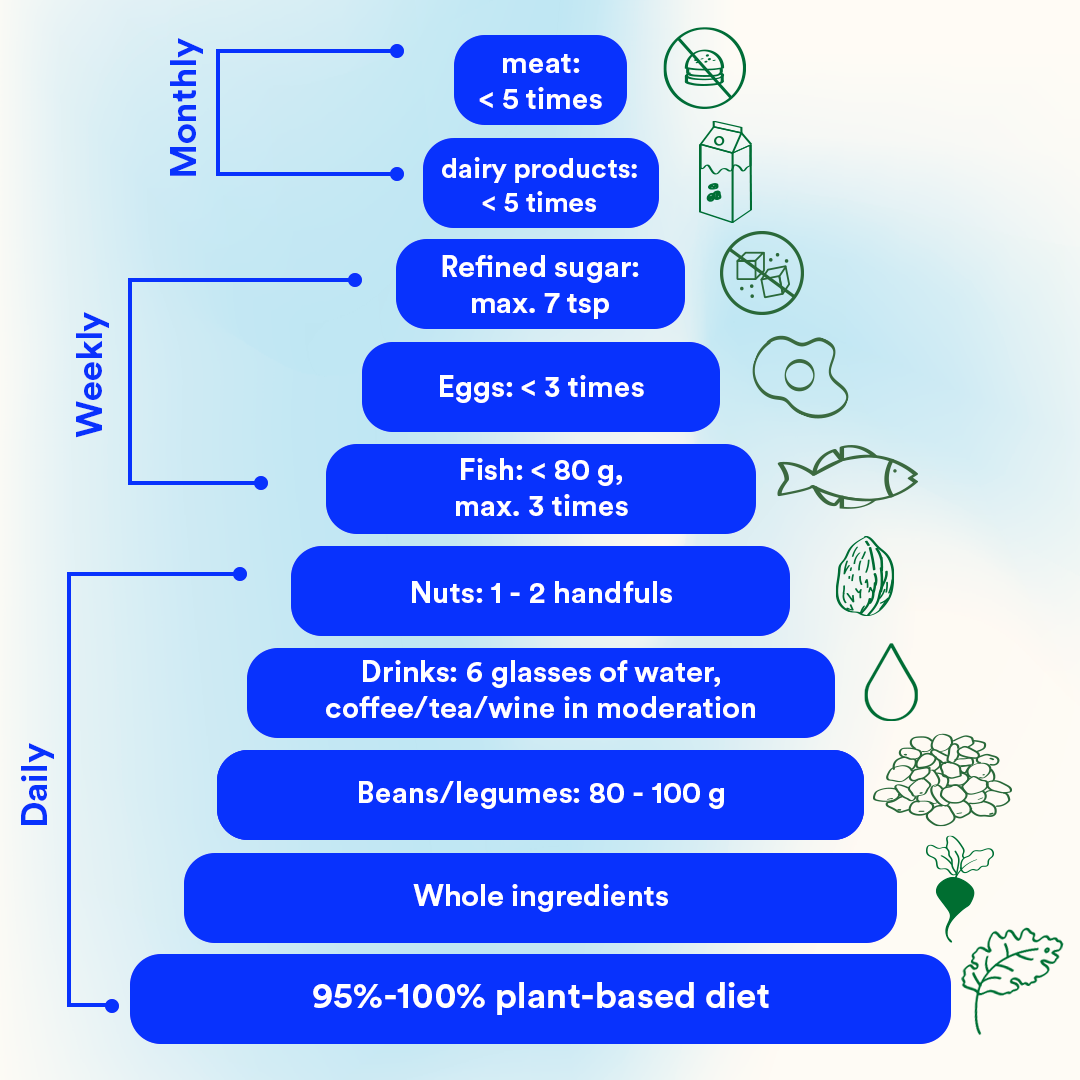 In addition to nutrition, certain lifestyle habits in the Blue Zones are also part of the secret to a long life:

The Blue Zones diet is not a diet, but a balanced, sustainable way of eating that has been established over the centuries because of the foods that are found. In the Blue Zones, food is mainly plant-based, animal products are only eaten on special occasions. The attitude towards life plays a big role, i.e. cultivating social contacts and a mindfulness practice.